Greater St. Louis is the metropolitan area that completely surrounds and includes the independent city of St. Louis (its principal city) and parts of the U.S. states of Missouri and Illinois. Depending on the counties included in the area, it can refer to the St. Louis, MO-IL metropolitan statistical area (MSA) or the St. Louis-St. Charles-Farmington, MO-IL combined statistical area (CSA). As well as the city St. Louis, the area serves the Southern Illinois counties of Bond, Calhoun, Clinton, Jersey, Macoupin, Madison, Monroe, and St. Clair (known collectively as the Metro East); the Missouri counties of Franklin, Jefferson, Lincoln, St. Charles, St. Louis County (separate from and not inclusive of the city of St. Louis), Warren, Washington, and a portion of Crawford County. The CSA includes all of the MSA listed above and the Farmington, MO micropolitan statistical area, which includes Washington and St. Francois Counties. The CSA was the 19th largest in the United States in 2013, with a population of 2,913,673, while the MSA was the 19th largest in the country that year with a population of 2,815,467. 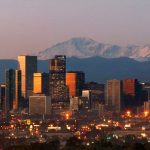